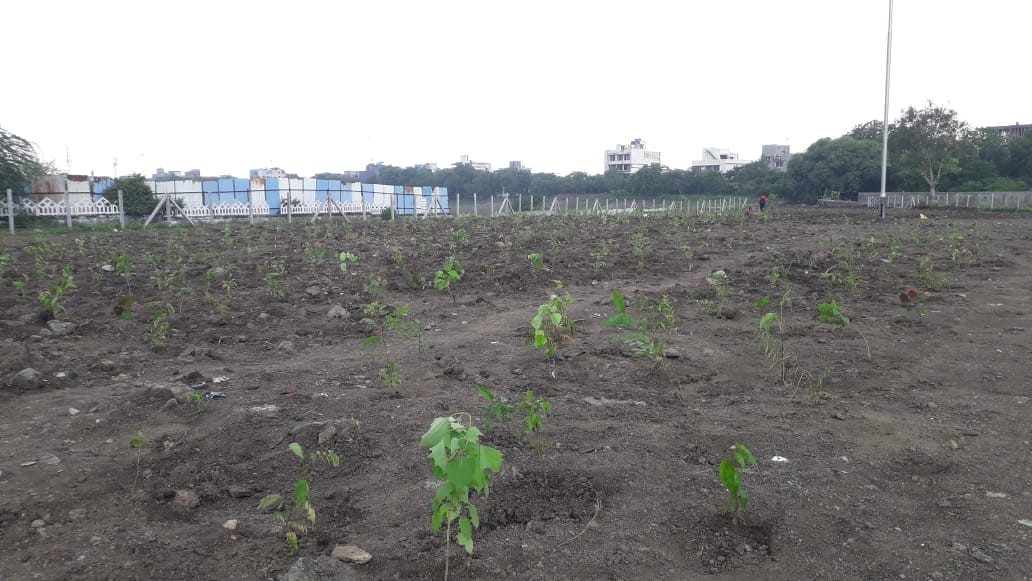 EFI celebrates one year of collaboration with Indore Municipal Corporation to develop the urban forest- Ahilya Van in zone 7. Considering phenomenal results where a barren land turns to a tiny green space amidst a dense population, IMC has decided to develop another 400 such Ahilya vans across the city to set up decentralized green spaces to tackle the rapid urbanization and increase greenery in the city.

EFI has also taken up 5 of such Ahilya vans and working at a fast pace to make full use of monsoon showers for plant growth. The second Ahilya Van in the city is being developed at Goyal Nagar powerhouse where significant progress has been achieved. Land leveling, debris removal, soil bed preparation and plantation have been done in the months of July and August.

In the first phase of the project, 5-7 feet deep trenches at uniform intervals were dug in the complete 1.2 acres of the land parcel. The sloping was done towards the adjacent Pipaliyana lake to make good drainage conditions during the intense rainfall and prevent waterlogging. Years of accumulation of plastic and other non-degradable trash were then removed along with dumped construction debris.

After the removal of undesirable elements, the Miyawaki soil bed was prepared with green waste such as tree leftovers, dry leaves, food waste and animal excreta consisting majorly of cow dung. After the application of these green organic compost in layers, the top soil was again spread over the entire series of trenches to left degrading slowly and providing nutrients to the plantation.

In the next phase of the project, school and college students, local citizens, representatives from various NGOs and institutions along with government officials were invited to plant the saplings on the ground ensuring larger community participation. A total of 6000 saplings were planted in a subsequent manner with these volunteers.

The land parcel which was once a dump site for construction debris, municipal waste and stray animals, now has turned into a beautiful afforestation site and is ready to further transform to another green center to be called as Ahilya Van. With multilateral partnerships from students to government officials, NGOs to industry representatives and local citizens, this project yet again showcases how multiple stakeholders with support from the administration can turn the tables and do green wonders in a dense grey landscape of concrete. EFI thanks Indore Municipal Corporation and each of the volunteers to participate in the cause of making Indore cleaner and greener.